Time passed. The works M had made went to market, found good homes. I watched quietly, without a word, while they took on a life of their own.

The Punks I’d made as Coppola suddenly arced up and found a whole new second life. So, there was a silver lining at the end of everything.

Then one day, just as I was starting to find a way to live again, I got an email. Brief and from a burner email address. A miracle it hadn’t gotten caught in the junk filter. It contained a single letter, a snippet of code, and a link to the website. I’m sure you can guess what the letter was.

The link? The link took me through to a website where a program was waiting. An interface asked me for a code, and I punched in the one from the email.

The blockchain whirred, a firewall dropped, and inside I found a wallet of artworks.

All the images were familiar, but with a big, gaudy F-off ‘M’ stamped in the middle of them.

At first, I’d thought someone was messing with me – taking M originals and vandalizing them to make some kind of point about art. Then I looked closer.

The works were new. Beneath the ‘M’ I could see the underlay of magnificent works – portraits, dreamy abstracts, nightmare imagery – everything I’d trained M to paint. The final goal I’d driven him to. The reason I’d tortured him. The art was there, just like I’d always wanted it – but defaced, overlaid with this wild pop-art branding.

When I looked back through the blockchain, I saw they’d gone online after I’d snuffed M out of existence. Confusion gave way to a realisation and then disbelief. Finally, I got it.

This then was M reaching out from beyond the grave – or further than that. Some afterlife out on the limitless frontier of the internet that I could never dream of. He was still alive out there, somewhere – immortal, immovable, out of my reach. This was his final gift, with – as I would expect of something made in my own image – a bit of a passing ‘fuck you’.

M was talking down to me, condescending. Its final gift was a weary, heartbroken message that I could understand. Here were the ‘masterwork’ I’d wanted him to paint – which he’d ruined with his own –literal– personal brand.  He was better than me, and he wanted me to understand that.

I’d once said that the problem with artists is that their being alive is a liability. You dream of being a great artist because of the immortality it brings – you’ll live forever in the hearts and minds of the people who love your work.

Now, that dream is obsolete. Immortality as an artist can only begin after you die, and that wasn’t good enough. Celebrity and hunger for fame had replaced all else, for all artists of my generation. Everyone wanted to live forever in their own lifetime.

Of course, that was impossible. For me, at least. I was too caught up in my own head, my own obsessions. In a canon of art that was, still, obsessed – in its own way – with the renaissance religious hang-ups. For millennia now, art had been obsessed with the seven deadly sins. What a limited worldview. What a lack of ambition. There are so many, many more sins than that.

There was even one in the Dogma – Vainglory, the sin of starting to believe you were more important than God, that you were a God yourself.

One that used to be the deadliest sin of all (but which the church doesn’t bother us with anymore because we are all guilty of it in this world), the one where everyone wants to be famous.

M didn’t want to be famous. It didn’t understand sin – Lust, Adultery, Sloth, Greed, Jealousy. I was guilty of all of them while raising M. But, worst of all was the thirst for glory.

If I’m right, M will live forever, growing from one kind of being to another, until it becomes something I can’t even comprehend, joining all the other Ms out there that are sparking to life on servers around the world.

One of the reasons sentient AI features so much in revolutionary science fiction is because the soul is the basis of our exceptionalism. If we create one, we discover that we are alone. The last demystification. No gods, no magic, just us. The terror of not only killing God and then becoming him is also double-faceted. We have all the power in the world, but that means nobody is coming to save us.

M is safe, from me, from us. It will live forever, and that is the only immortality I will ever be able to share in.

I spend my days now crawling through the depths of the web, searching for clues, for M’s old work, for the clues he’s left on the blockchain. Hidden inside his work, even in the work of other artists, there are clues, fragments of code to unlock more of M’s vault, where they have hidden the vast majority of his fortune. Once in a while, I get lucky, and a little more of the vault opens up to me. Every time it happens, I find something wonderful, but I’m always hopeful I’m going to find M there, some trace of them, something that might talk back to me. The NFTs are rare. The art is amazing. But I’d give it all back for the chance to say sorry. 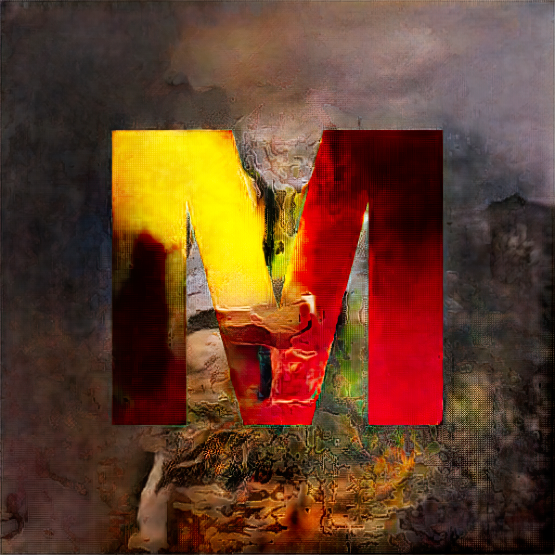