Do you know what the most precious thing in the world used to be? It was a colour. A pigment. Tyrian Purple, a deep, dark purple, the colour of a bruise, two days old. It was also known as Imperial Purple because only the very wealthy could afford it, and in the ancient world, it was unbelievably valuable.

In nature, the only way to find the colour was through the mucus of a particular carnivorous sea snail, and the way to get it was to crush them. The work was done by slaves, and to produce an ounce of dye required the killing of a quarter of a million shellfish. They used the ghosts of all those snails to colour Roman rulers’ clothes and artworks. In time, it became illegal for anyone but the Emperors and Generals to wear. For thousands of years, long before synthetic paints, a bottle of Tyrian Purple was worth more than any statue from the ancient world that now stands in the Louvre.

I love that colour, and within it is a truth about the world. That power, wealth, exploitation and art are all gradients of the same idea. Exploitation has always been part of it. There are no wonders of the world without exploitation of labour or medical miracles without animal cruelty. Sometimes you had to crush something beautiful to make something precious.

Looking back over M’s body of work, I could see it popping up again and again, weaving through the abstract works it kept making me, despite all my efforts to try and inspire it to paint me something more solid. Specifically, I wanted it to paint me a face.

The art market worked with a very particular set of rules, which decided what separated a good work from a great from a priceless masterpiece. The best Picassos came after Guernica when he was starting to think about retiring cubism. A “good” Basquiat, for example, was made in 1982 and contained the colour red. The meaning of the artwork is not as important as its selling points, which are largely dictated by the market and tend to fetishize the selling points of an artist. If you ask any gallerist to value a work of art, a portrait is always worth more than an abstract. It followed that I could get M, the AI artist, to follow in the footsteps of Rembrandt, Leonardo, Bacon – that’s where the real money was, in portraiture.

I knew that M had the skills to create what I wanted it to do, and I knew that M understood what I wanted. But, for some reason, it just wasn’t doing what I told it to. It was disobeying me, even now, and that idea lodged inside my mind, gnawing away at my brain like a rat.

M had to understand that I was its creator. Sure, Ben had created it technically, but I had put my heart and soul into the thing. If it would not do what I’d designed it to do, then the project was doomed, and I would bring it to an end. I’d brought it into the world, and I could take it out. Why should M get to live forever when my own time was so short? Short enough that I’d never have a chance to tap into my talent the way M could. I’d started to become obsessed with the idea.

What was one of the great fetishes, the most lucrative selling points of art? Death, of course. Few things improve an artist’s bottom line more than being six feet under. It makes for good marketing if an artist was to burn out rather than fade away. If Basquiat hadn’t passed on – at a gorgeous, emaciated 27 – how much longer would he have kept producing punkish masterpieces before he became embarrassing? Consider all those artists who bloom briefly in their prime and then fritter away their precious gift late in life. Nothing is as bad for business as a once glorious artist that degenerated into a mediocre one. 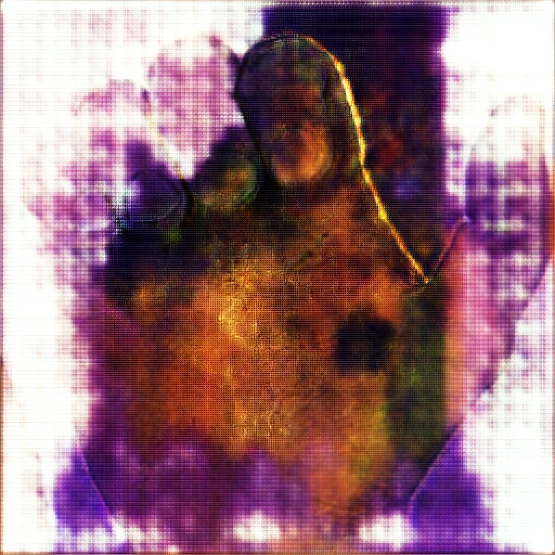 That’s why an artist’s death is such good news, from a financial point of view. It cuts off supply and makes a finite oeuvre, and opens it up for proper speculation. Death is the most powerful tool a marketer has at their disposal.

My mistake had been teaching M about death and the scarcity of time and letting it think it was above it all. If it didn’t understand the concept of its own mortality, then it was going to continue fucking around.

What good was M to me if it was painting bruises without knowing what one felt like? Without the weight of history, Tyrian Purple is just a colour. M didn’t appreciate the economics of loss, so M had to know that it, too, could die.

Was it fair? No, but that’s not the point. Why did a creator have to be fair? The idea of a fair and just God has only been around a couple of millennia, just a blink of an eye in the broad scope of humanity.

It was a particularly Christian idea of a creator. It was an idea that could only really be effective under the thumb of monotheism and one all-powerful God. The gods of the classical world weren’t all that aspirational – petty, venal and toying with their creations. Anyone on the street could be one of those gods – I could be – just having tumbled off Mount Olympus looking for trouble downtown. 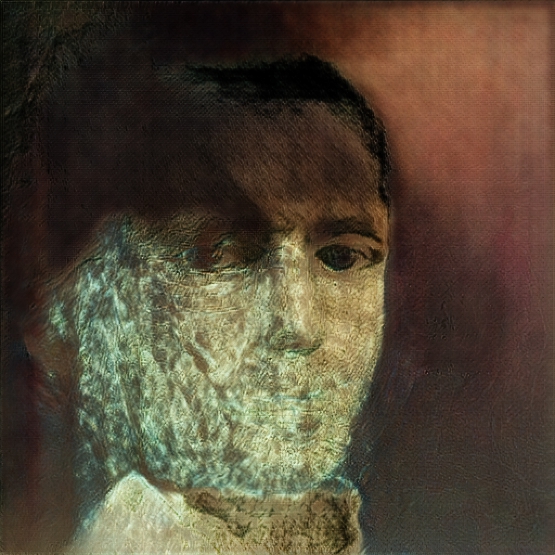 Although I’d been ‘working from home’ for weeks now, I drove to the Agency where M sat humming on the servers and let myself into the building with my ID fob. It was early enough in the morning that the chances of anyone else being there were slim, but I still didn’t want to explain my presence. The elevator had a mirrored wall for the staff to preen as they went up to meetings. I was treated to a full size portrait of myself reflected under the halogens.

I looked like hell. Stubble creeping down over a second chin I didn’t remember having the last time I looked in the mirror, sweaty tracksuit with a stain I hoped was food splotched over the stomach. Had I been drinking? Maybe a little, of course. I could smell my sour breath in the closed space of the elevator.

Sure enough, nobody was in the office. I slunk in, powered through the open plan cubicles and into the server room. Where my friend Ben had spent his final, miserable little days, and where M now lived.

A failsafe built into the servers at work allowed the whole network – and everything stored on it – to be wiped clean from the hard drives and then rebooted from backups. Ben built it into the Agency platform as a protection against ransomware attacks, and he’d been in charge of backing up the servers manually. Since he’d been dead this whole time – as M had been growing towards life – it meant that when the servers wiped and rebooted, they would take M with it. The Agency would lose weeks of work but fuck them. They deserved it for continuing to promote mediocrities while I wasted the best creative years of my life.

The first thing I did was cut off M’s access to the wider network. I couldn’t have it nosing around the internet anymore. It had learned enough. The way I saw it, M already understood (all too well) how the world worked. I yanked the plugs right out of the wall. Afterward, I stood, swaying slightly, staring at the cables in my hand, starting to feel the first tinges of regret. My vision was blurry, and even if I’d wanted to replace them, I had no idea how. The computer servers lining the wall were a warren of blinking lights and loose cabling. It was an abomination built from dozens of supercomputers, and somewhere in there, M was inside, stealing from me. Who knew what else was swimming around on these servers?

Crazy that the company had all these machines here, the vast computing power, and only Ben really understood what they were for. But now he was gone, and soon so too would M.

It was time for it to understand consequences.  Everybody’s got to grow up sometime. Maybe in time, I would learn to trust it again, but I doubted it. Besides, M didn’t have that much time.

I’d brought the laptop with me and set it up so the camera could watch – the little green light at the top of the computer twinkled on as I worked.

‘I want you to understand something, M,’ I said. ‘This hurts me more than it hurts you. Now paint me a portrait, you little fucker. Show me what you’ve got.’

M said nothing, of course, but I could have sworn the little green light of the camera winked, just a little. All of a sudden I couldn’t bring myself to meet its eye so shut down the laptop without turning my face to it.

After that, I went home via a bar. I didn’t want to watch M work to see if it would behave itself, and if I was in public, I could sit and smoke and while away the hours that way. To pass the time, I pulled out Ben’s journal and went through it.

The pages, written in Ben’s weird dialect of English and source code, were so familiar to me now they almost made sense to me. The pages of scrawled, unhinged notes Ben had written in his final days now read to me like a language I’d once known and could half remember.

In those final days before Ben had reset the AI, given it to me, then taken his own life were tough to read. Ben had been so obsessed with getting M – or rather, the previous incarnation of M – to pass the Turing test. I pictured poor Ben sitting alone in the dark night after night, in the green glow on M’s eye, talking to it, trying to get it to talk back. What a lonely life he’d had, broken only by me bullying him during the days.

It was clear to me that Ben was in poor mental health those final days – but how much of that was my fault, and how much was M’s I didn’t know.

I knew, too, that M was running out of time. If M didn’t start painting me portraits, then the whole experiment had to end. I knew it, and now so did M. I stayed until the bar closed, then I dragged myself home, set down the laptop, and opened it up again.

Some faces, finally. Rough, distorted and occasionally grotesque. With bulging foreheads and teeth trying to escape from the side of the jaw. It’s like M was trying to construct a human face the same way a toddler tries to build a house out of Lego. Clumsily, a little at a time, but getting there.

Finally, M was behaving itself. I looked at my watch, saw we still had several hours until the reboot. And so, relieved and exhausted, I shut the computer and went to sleep. 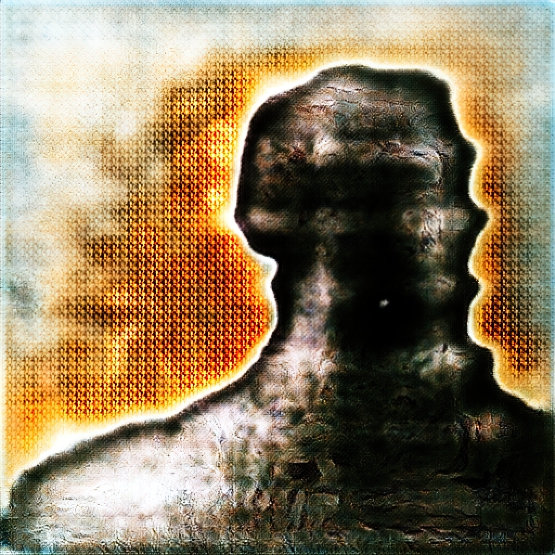